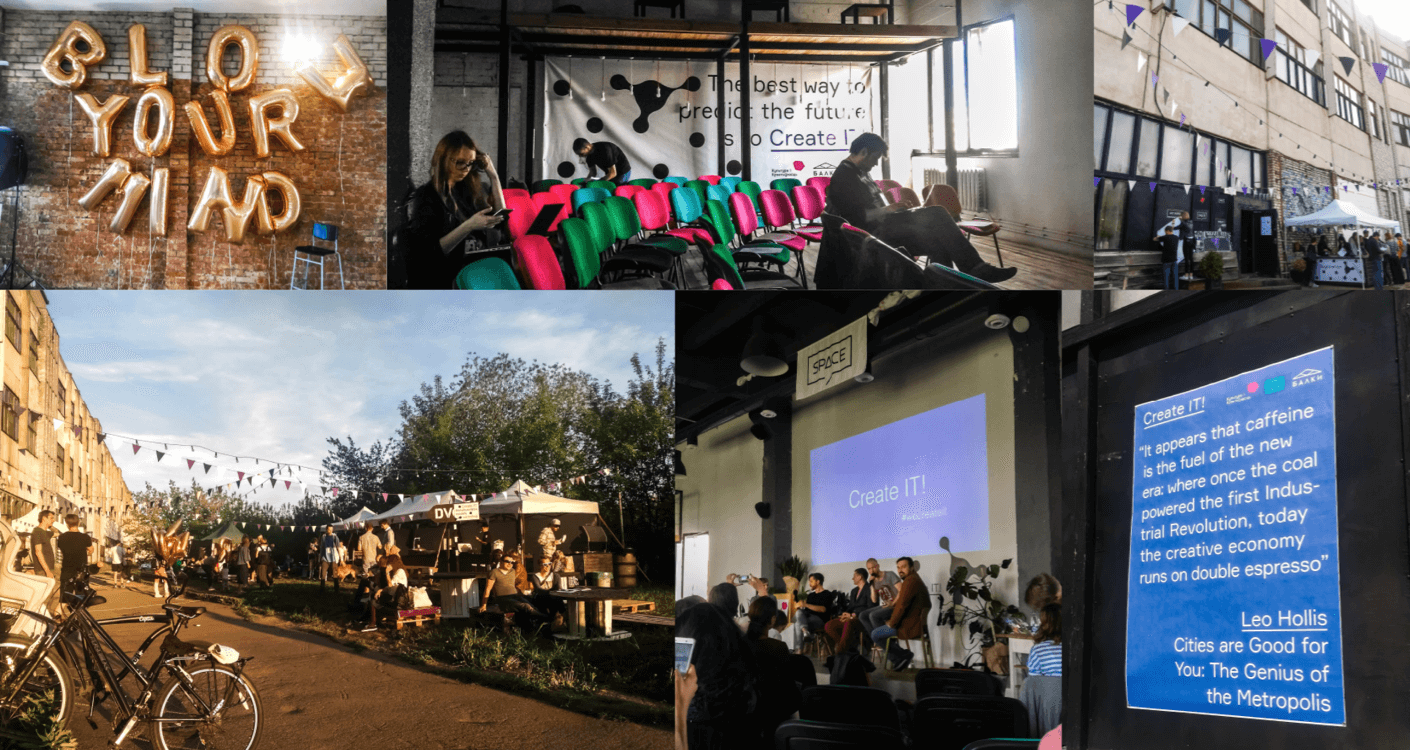 Highlights of the conference on creativity & technology.

“The best way to predict the future is to create it” — this idea was a core inspiration of  “Create IT” conference, dedicated to creative industries and modern technologies. The conference was held on May 19th in "Eventspace".

Having taken part therein, we brought inspiration and new ideas to the team. Our short review is devoted to the theses of the conference.. 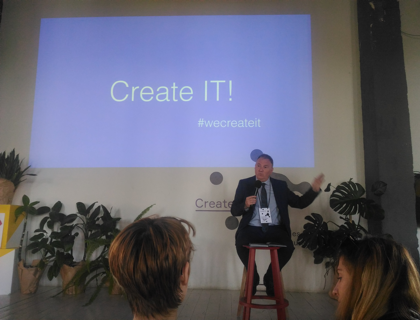 The conference was opened by Tim Williams, the leader of the EU-Eastern Partnership Program "Culture and Creativity". He spoke about rapid growth of the number of microprocessors and advancement of technology. Tim also shared his philosophical predictions about development of culture and technology by 2050. According to his views, the world departs from a system when an individual is competent in one sphere. We are moving towards a world in which everyone will be a multi-disciplinary professional. Thus, the sphere of creative industries is the sphere of the future.

Andrew Erskine, an expert at Tom Fleming Creative Consultancy, started his speech with the definition of the "creative industry" - a term, which is connected with advertising, architecture, art, film, music, television and other sectors. Creative economy is based on how people use their creative thinking and imagination, so creative industries are the main driver of innovation.

Culture and creativity — in scope of cities (not countries)!

This is indicated by cultural and creative tourism, understanding of ecology and integration of various organizations and institutions within the city.

Julia continued the conference with a story about the hybrid space. This was the success story of the project #nevicata14 — an experimental pedestrian configuration of Castello Square in Milan. The project attracted public attention, received support and was successfully implemented.

#nevicata14 is the free space of Castello Square with the equipment for public use of the area: various types of seats, structures protecting from the sun, platforms for public events, lighting elements, signs, toilets, etc. Everything is supported by a functional wi-fi service, a website that provides easy access to all active services, social channels that allow maximum dissemination of content and communication with the residents. #nevicata14 has a system of services — physical and digital — to support the use of the area: calendars, applications, lighting technology, media library, integration with major service platforms of the city.

#nevicata14 is a project at intersection of architectural, communication, technological and social solutions.

More detail can be found via links below: 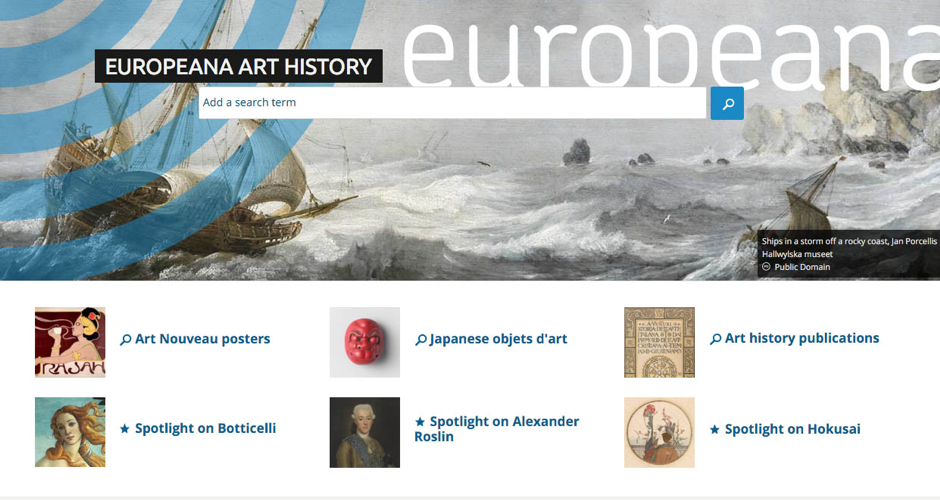 The main center of TUMO is located in Yerevan, in 2013 a center in Dilijan was opened, in 2015 — in Gyumri, as well as in the city of Stepanakert in Nagorno-Karabakh. From this video you can learn how the TUMO center looks like inside and how the classes are held, hear the feedback of students and teachers.

See works by TUMO students on the official YouTube channel. 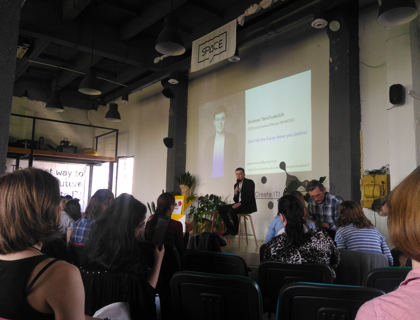 Andrew Yanchurevich is a creative director at MSQRD and Contractor Producer at Facebook. The main idea of Andrew’s speech was “do not let the future leave you behind”.

At the Q&A session, Andrew was asked about MSQRD application, which, according to the speaker, was used as an emoticon for communication and sending messages. Emoticons are used for emotional coloring of the text, so, this comparison seemed strange for an application with masks. Andrew replied that, having analyzed user preferences, they understood what people actually use the application for — for communication. Therefore, partnership with Facebook and integration of the functions into the messenger was the best solution for all parties.

Gunita is the founder and CEO of Vividly App — VR tool for visualizing interior or design of buildings.
The presentation was not focused on Explicit App or its success story. Gunita tried to convey the main idea — Your company is YOU.

Gunita shared the idea that real creators are the people who want something so badly that they can't sit still. In any case, you need to try and do — You win or you learn. Gunita also actively participates in various conferences, holds presentations and speeches. In one of them, she talks in detail about possibilities of virtual reality in architecture. 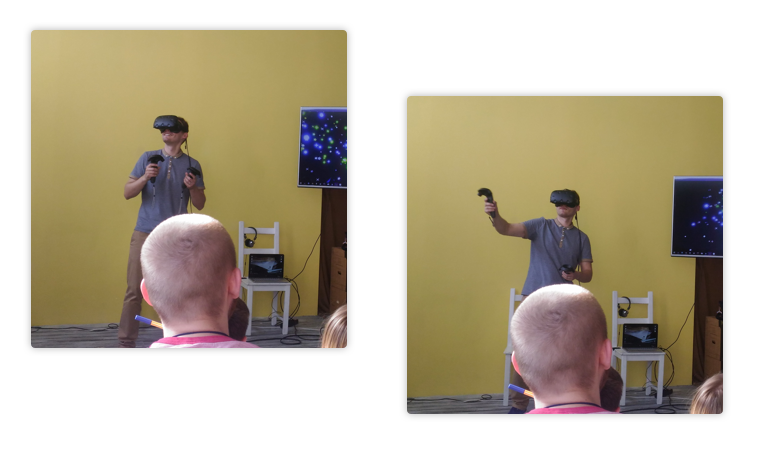 In addition to lectures, the organizers arranged a few workshops. For example, you could go learn creative coding, visual experiments in the form of glitch, developing business models at the junction of culture and technology, or managing cultural organizations and creative people. Unfortunately, they all took place at the same time and you could attend only one. We chose for ourselves a workshop mysteriously titled "Expansion of Reality".

It was dedicated to Virtual Reality and 360° video. Dmitry Sorokin, founder of the Virtual Reality Gallery in Minsk, was conducting the workshop. He began with the history of VR, spoke about the first achievements of the age of as early as 1960s.

He divided creation of VR-content into two types:

At the workshop you could watch a movie created in virtual reality or try to create it yourself. It looked exciting. This is a completely new environment, VR can take us anywhere. But why are we still not in there? Apparently, it is the matter of cost. No doubt, helmets will become cheaper, but still are far from taking the place of a TV in each family.

But there is another unobvious problem that hinders spreading of VR. And it is not tools or a lack of developers. The problem is the lack of a visual language for virtual reality. For example, we all can imagine how a menu looks like in mobile applications or games. Usually it contains icons and text. But you cannot make it that way in virtual reality, all objects around are similar to real objects, rather than to flat icons.

Virtual reality is not just for games. It is actively used by accessory and fashion designers, artists. It is great for designing and sketching in architecture or to show first sketches to the customer.

There are comics in VR, where you can go through the frame and get into the world of the character. Even serious filmmakers do not pass by new technologies. This year in Cannes a film by Alejandro Gonzalez Iñárritu in virtual reality was shown for the first time. And those who happened to see it believed that they were watching the future of the cinema.

In that way, step by step, VR will penetrate into our life. Now this language is just emerging, but it is even more interesting to observe the development of such a mysterious virtual reality.

Do not miss the chance to have VR functions integrated into your app by professional mobile app developers.