Toonbox is an animation studio famous worldwide for such animated series as "Mr. Freeman", "Kit^n^Kate", "Cut the rope", etc. They asked us for help in creating a mobile app "Kit^n^Kate", which allows users to watch and download any season or episode of the animated series.

Design and development of the multilingual mobile app “Kit’n’Kate”

Design and development of the admin panel for adding files.

We have divided the TA of 'Kit^n^Kate' into 3 sectors: parents, children and studios interested in development of a similar mobile app.

Parents are those users for whom the convenience and simplicity of an app is important as well as the protection of a child from undesired content and their budget from accidental in-app purchases. It is also important that a child can easily perform the necessary actions in an app and watch cartoons without distracting parents. 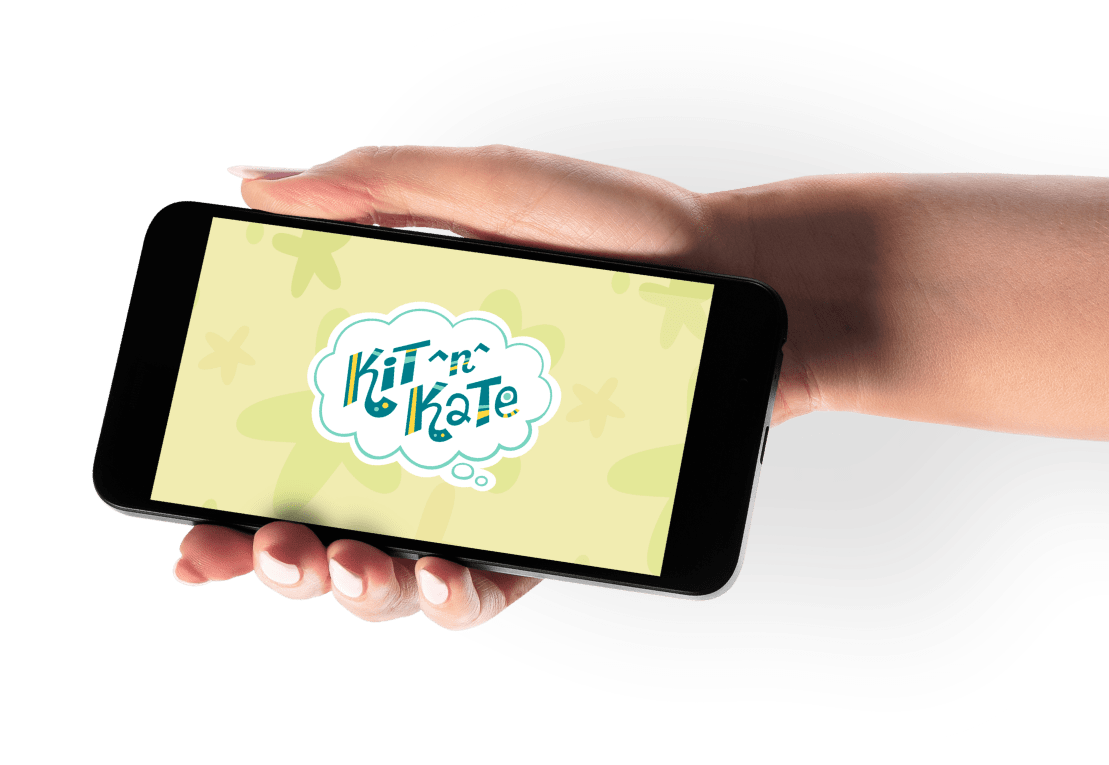 What benefits does our app offer? 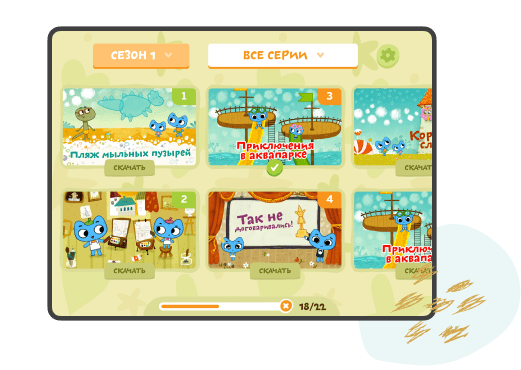 Opportunity to watch certain studio’s cartoon or even certain animated series, which allows you to pay special attention to the interests of your TA. In MVP versions of the app we suggest to focus on one cartoon expanding the studio content over time. 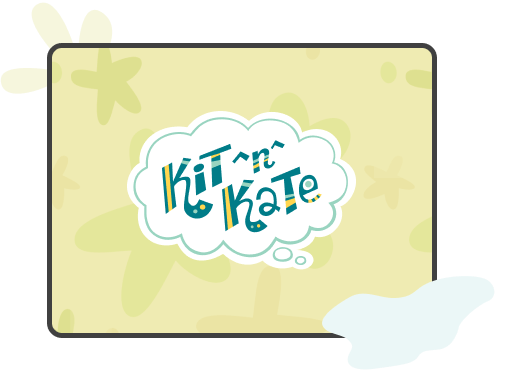 Children can’t switch to undesirable content, whether ads or videos an app offers, what is really important for parents. For example, the popular YouTube Kids app allows children to switch to negative or inappropriate for their age content. Own studio apps prevent this from happening because they precisely monitor and manage their content. 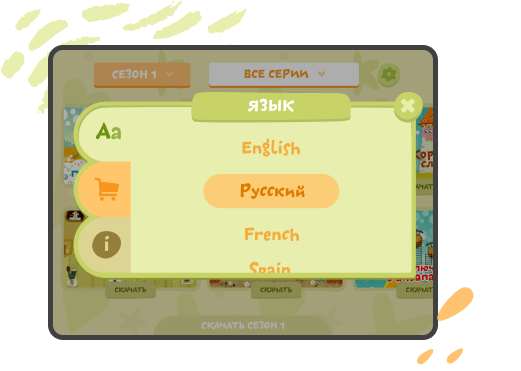 Thirdly, some parents travel a lot and change their work locations. It is important for them to be able to download series and have offline access. A significant factor for them is to have an app in the target language, regardless of current location.

"Kit^n^Kate" is a multilingual app that supports 11 languages. Once a language is selected, the user gets content in the target language, as well as localization of the whole app. 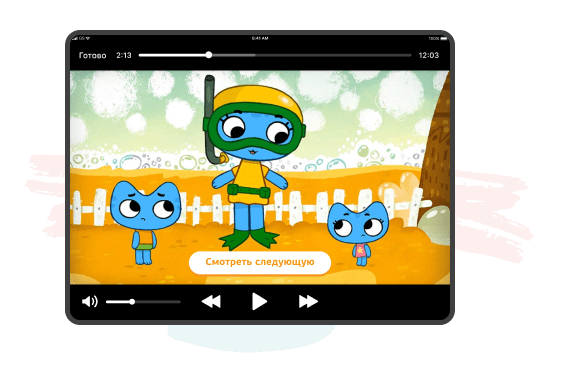 Parents don’t want to be disturbed once again, for example, for switching episodes. In this case we have foreseen autoplay of the next episode. The interface is simple so that children can easily choose any episode themselves. 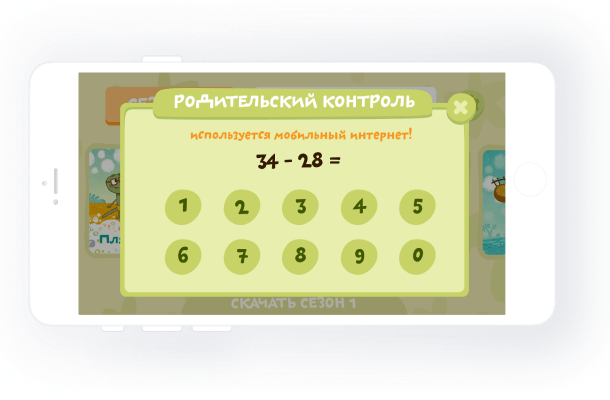 What if a child has downloaded episodes without parents knowing and spent a lot of mobile data traffic? Parental control can prevent such situations. During the download process the user is asked to solve a math problem, which is easy for adults, but will be a barrier for children.

A simple and clear interface is important for children, so that they can easily find what they are looking for and start watching cartoons as quickly as possible. In order to meet these requirements, we have made large episode blocks, convenient switching between seasons in the form of a drop-down list. We have also foreseen horizontal orientation and tablet adaptation, which is used by most similar apps for convenient watching. Many children use YouTube and are accustomed to its interface and the layout of elements.
YouTube is one of the first platforms in the world that sets trends which we also try to follow. We have also made a handy player with minimum functions (play, pause, rewind), and autoplay of the next episode, if it’s available. So thanks to this simple, clear and bright interface, children will find the app convenient and interesting and it won’t take much time to figure out how it works.

A mobile app is a powerful tool for increasing customer loyalty. Your own studio app will provide constant interaction with the users and you will take full advantage of personalization. Many market leaders such as YouTube, ivi, TVzavr and various TV channels have their own apps, so it is a great way of competing with other studios. It’s also an opportunity to improve a market status as well as to attract new users.

Another important feature is your own content management system, which allows studios to independently manage both content and multiple languages. We let you do it with the help of an easy-to-use admin panel, where studio members can easily add both new episodes and localization. Using your own content management system, you can avoid undesired content because uncontrolled systems can use aggregators that absorb content from different resources. 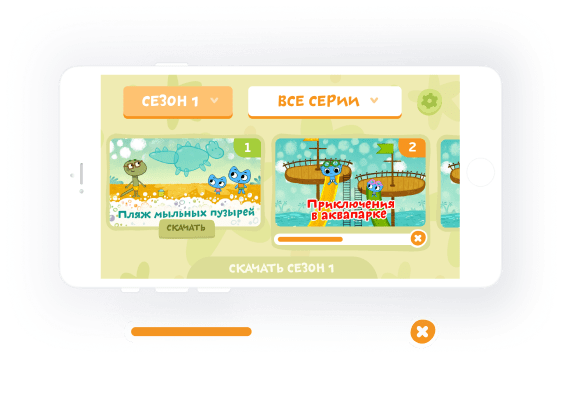 Convenient video player, the opportunity to download certain episodes or the whole season quickly and watch them offline are particularly valuable for the user. If to speak about the client it’s a subscription monetization. So we decided to highlight the implementation of these features in competitive analysis. We excluded registration from the app, so as the main TA of the app are children and their parents. The sooner they start watching, the better. 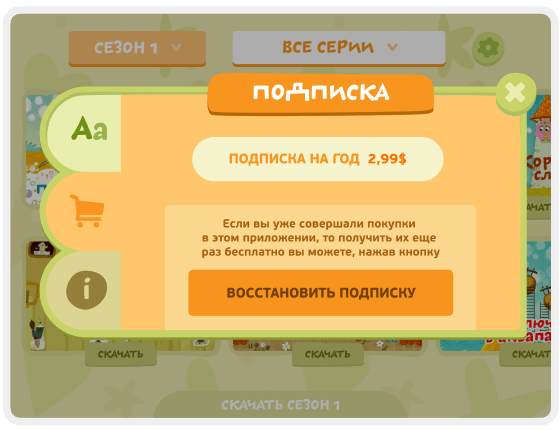 We have also chosen the horizontal orientation, because we adapted the application to tablets. Then a very important step was to create a video player. Many apps offer such video player features as preloading and watching even in case of loss of connection and loss of connection message. We added the message, also provided autoplay of the next episode, if it is available, rewind, key lock. 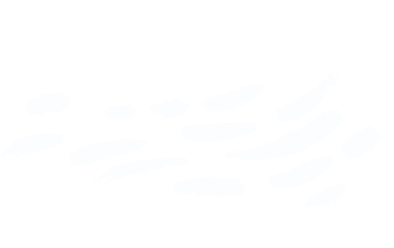 Many of the analyzed apps allow you to view a certain number of episodes free of charge and download for a fee, which interests the user in buying a subscription even more, because of the relevance of the offline access for the TA.

Last but not least, very useful and widespread feature is restoring of purchased subscription bound to the Apple ID. The user can access all the functionality of the app on another phone or device.

During the app development we faced a very serious and important problem - we had to choose the hosting service to store the content based on value of money criteria.

Many of them were not suitable because of high price, lack of well-functioning streaming and sharing.

so a back-end developer is absolutely necessary